The first part of this page has a hotel vocabulary list and material to help you learn the words. Then the second part has some exercises to test your knowledge of the vocabulary. In the first part the ESL hotel vocabulary list has about one hundred words related to staying in a hotel, and each also has a definition and the part of speech listed. After the list there is a set of flashcards that you can download to help you learn the words. Then there is a recording of the vocabulary being spoken by a native English speaker so you can hear the correct pronunciation.

Then the second part has the following three activities to test your understanding of the vocabulary:

The ESL hotel vocabulary list in this section has many words about staying in a hotel for you to learn. For each item there is also a definition and the part of speech is listed. Try to learn as much of the vocabulary as you can. Then there is a set of flashcards for you to download and use at home. Finally there are the recordings of the vocabulary being spoken by a native English speaker.

Accommodation: A place to stay. (noun)
Alternative: Another choice. (noun)
Amenities: The things that are available for guests to use or do in or around the hotel. (noun)
Appointed: To be filled with furniture and fittings. (adjective)
Appreciate: To like, enjoy. (verb)
Award: Something that is given for being very good. (noun)
Balcony: An outside space enclosed with a protective edge. (noun)
Bar: A place to sit and drink, and also eat food. (noun)
Basement: A space under a building. (noun)
Bed and breakfast: The price includes the room where you sleep and the food you eat for breakfast. (noun)
Bellboy: A person who carries guests’ luggage to their rooms. (noun)
Booking: To secure a room to stay in a hotel (same as reservation). (noun)
Brochures: An information booklet. (noun)
Buffet: A counter where you help yourself to food. (noun)
Building: A strong covered area that protects from the wind and water. (noun)
Check-in: To arrive at a hotel and get access to your room. (verb)
Check-out: To leave a hotel and stop using the room. (verb)
Choice: The act of making a decision. (noun)
Comfortable: Very soft and cosy. (adjective)
Complimentary: Something that is free. (adjective)
Concierge: A person who can organise special requests for hotel guests. (noun)
Confirm: To accept, agree. (verb)
Continental: To be from mainland Europe. (adjective)
Convenient: To be very easy and just right. (adjective)
Credit Card: A method of payment. (noun)
Cuisine: The prepared food that is available. (noun)
Dearth: A lack of, nothing there. (noun)
Deliver: To take something to an agreed destination. (verb)
Dictate: To tell. (verb)
Double room: A room with one bed that two people can sleep on. (noun)
Efficient: Well organised. (adjective)
Elevator: A way of going up or down in an enclosed box driven by electricity (American English). (noun)
Encourage: To give hope or inspire. (verb)
Enjoyable: To make someone happy. (adjective)
Establishment: A reliable constant building run by people. (noun)
Expensive: To cost a lot of money. (adjective)
Experience: The wisdom gained through practical application. (noun)
Facilities: The areas and items that are provided for use. (noun)
Fitness centre: An area with a gym and swimming pool. (noun)
Folder: The outside cover that holds information leaflets. (noun)
Frequently: To happen very often. (adverb)
Front desk: The place where the receptionist works (same as reception desk). (noun)
Fully booked: To have no rooms available (same as no vacancies). (adjective)
Guest: A person who is staying in a hotel. (noun)
Helpful: To be kind, showing you the way, giving information. (adjective)
Hostel: A cheap hotel that caters to young people. (noun)
Hotel: A place where people pay to stay for short amounts of time. (noun)
Housekeeping: The people who and action of keeping the hotel clean. (noun)
Information: News or telling you something useful. (noun)
Inn: Another name for a hotel, often found in the country. (noun)
Interest: An understanding of information. (noun)
Leisure: Free time to enjoy yourself. (noun)
Lift: A way of going up or down in an enclosed box driven by electricity (British English). (noun)
Lobby: The entrance area of a hotel, often with places for guests to sit. (noun)
Local: Close to where you live. (adjective)
Location: The place where something is. (noun)
Luggage: The bags that travellers take with them. (noun)
Luxurious: Something very special, comfortable. (adjective)
Maid: The person who cleans the rooms in a hotel. (noun)
Manager: The person in charge of the hotel. (noun)
Memorable: Something that is easy to remember. (adjective)
Mini-bar: A small fridge in a room with food and drink that has to be paid for. (noun)
Motel: A cheaper hotel. (noun)
Natural: To come from nature. (adjective)
No vacancies: To have no rooms available (same as fully booked). (adjective)
Non-resident: Someone who does not live or sleep there. (noun)
Occupant: To take up a space, to live there. (noun)
Parking: An area where you can leave your car. (noun)
Pleasant: To be nice or kind. (adjective)
Price: The cost, how much money. (noun)
Provide: To give, supply. (verb)
Quote: To tell information. (verb)
Reception desk: The place where the receptionist works (same as front desk). (noun)
Reception: The area where guests arrive at a hotel and check-in to their rooms. (noun)
Receptionist: The person who greats guests and takes bookings. (noun)
Reduce: To make smaller. (verb)
Reflect: To see an image. (verb)
Register: A written list of items or names. (noun) To arrive at a hotel and claim your room. (verb)
Relax: To unwind. (verb)
Remove: To take away. (verb)
Require: To need. (verb)
Reservation: To secure a room to stay in a hotel (same as booking). (noun)
Resident: Someone who is staying. (noun)
Restaurant: An area that serves meals. (noun)
Room: The area in a hotel where guests stay. (noun)
Room service: When a guest orders food or drink to be delivered to their room. (noun)
Security: The means that are use to keep something safe. (noun)
Single room: A room with one bed that one person can sleep on. (noun)
Situate: To put something in a place. (verb)
Staff: People employed by a hotel. (noun)
Standard: An agreed level to try to attain. (noun)
Supply: To take to a place, to give, an order. (verb)
Theme: All the same. (noun)
Timetable: A list of agreed times for buses and trains to arrive/depart. (noun)
Tip: The extra money that a guest gives to hotel workers. (noun)  To give extra money to someone that helps you. (verb)
Toaster: A machine to cook bread. (noun)
Twin room: A room with two beds for two people to sleep on. (noun)
Vacancies: To have rooms available. (noun)
Vacate: To leave. (verb)
Valet: A person who parks your car for you. (noun)
View: What can be seen from the hotel (often the sea, mountains or something beautiful). (noun)
Waiter: The person who serves food in a restaurant. (noun)
Weekend: The end of the week (Saturday and Sunday). (noun)

The ESL hotel vocabulary from the above list has been made into flashcards for you to download and use whenever you have a free moment. To save a copy of them to your computer either click the following picture or link. 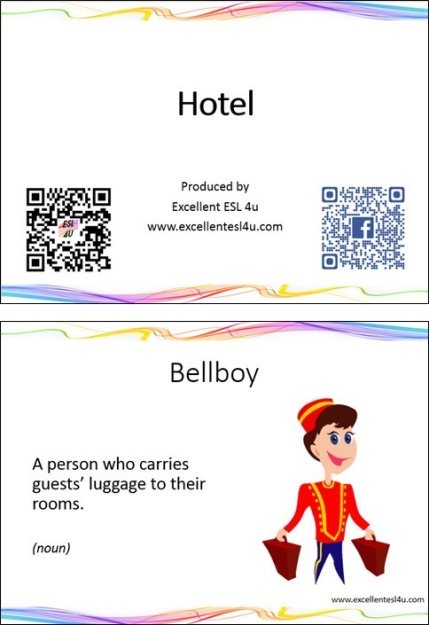 This part of the ESL hotel vocabulary page has a couple of recordings of the vocabulary being spoken by a native English speaker so you can hear the correct pronunciation. The first recording is just the spoken vocabulary, while the second is a video of the flashcards being shown while the words are said. Listen as many time as you need to for you to be able to remember the information. 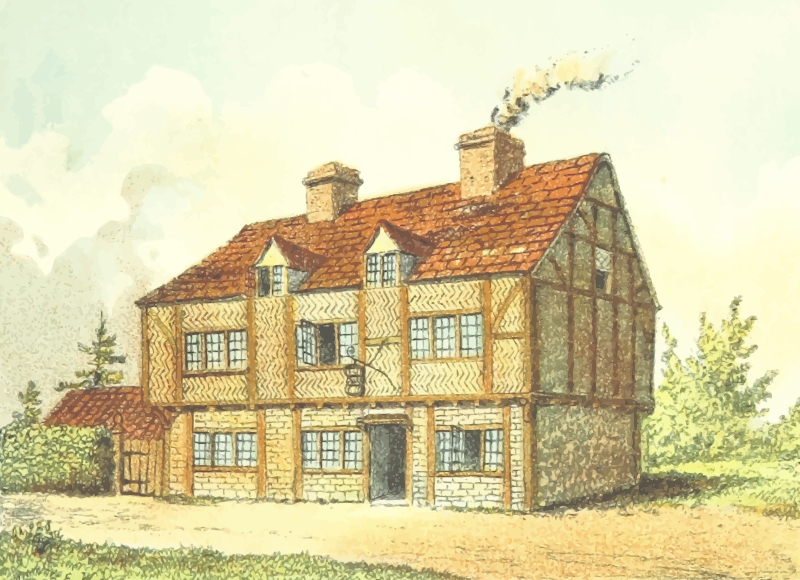 For the first ESL hotel vocabulary task you need to decide which option (A-D) in each question matches the words given. Once you have answered all the questions in the task you can use the get score button to see how many you got correct.


Choose the correct definition for the hotel vocabulary in this quiz.

In the second ESL hotel vocabulary activity you need to determine what is the best option (A-D) that matches the definition in each question. Then again you can use the get score button to how well you did.

Now in the third ESL hotel vocabulary exercise you need to look at the following pictures and chose which option (A-D) from each question is the best match for each picture. Then you can again use the get score button to see the correct answers. 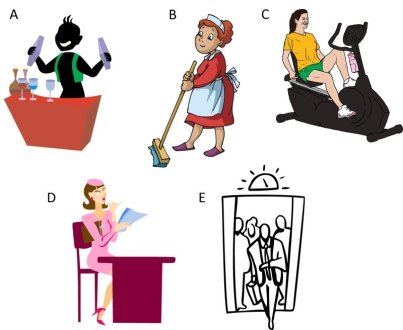