This page has example ESL politics conversations to help you learn how to speak about politics and to learn politics words. Being ready to have a conversation is an important part of becoming a fluent English user, and this page will help you prepare.

Situation: Andrew and Bob discuss going to vote in an election.

Andrew: I am going out now, I’ll see you at the lecture later.
Bob: Why are you going so early today? The lecture doesn’t start for ages.
Andrew: I want to go and vote at the polling station now as I’ll be too busy later.
Bob: Why are you going to vote? What is the vote for?
Andrew: What do you mean? It is a by-election.
Bob: Oh. I’d no idea there was an election.
Andrew: What do you mean? Haven’t you seen all the leaflets from the candidates?
Bob: I just threw them away. I wasn’t interested.
Andrew: Aren’t you going to vote today?
Bob: No. Voting isn’t important.
Andrew: Yes it is. It’s very important that you vote when you have the chance.
Bob: Why?
Andrew: Because we are very luck to live in a democracy and not under a dictator.
Bob: So do you vote in all the elections?
Andrew: Yes, I always vote. I think it’s very important to go and vote.
Bob: Should I go and vote today?
Andrew: I think you should, but it’s your choice in the end. Do what you want.

Situation: Patrick and Jane talk about politics in America.

Jane: Are you sad to miss the election in America?
Patrick: Not too much. Everyone gets very nasty with people who support the other party when there is an election.
Jane: Yes, I do not like it when people cannot debate about politics without becoming mean to each other.
Patrick: I think most people are ok, but the most vocal ones cannot cope with anyone disagreeing with them.
Jane: Will you try to vote in the election from overseas?
Patrick: No I won’t bother. I live in a state that very strongly supports one of the parties, so the other one will never win.
Jane: Which one?
Patrick: My state always votes Republican and the Democrats will never win there.
Jane: Do you want the Democrats to win?
Patrick: I’m not sure. I don’t support one party strongly, so I just look at the policies.
Jane: That is a good way. Consider both and then decide.

The following part of the page has the conversation tasks that you should do to practice using the politics vocabulary while talking. In these tasks you might need to write something first to prepare yourself, but the main aim is to be able to talk. So try not to do too much write as you get better at taking and just have a conversation without any notes to help. 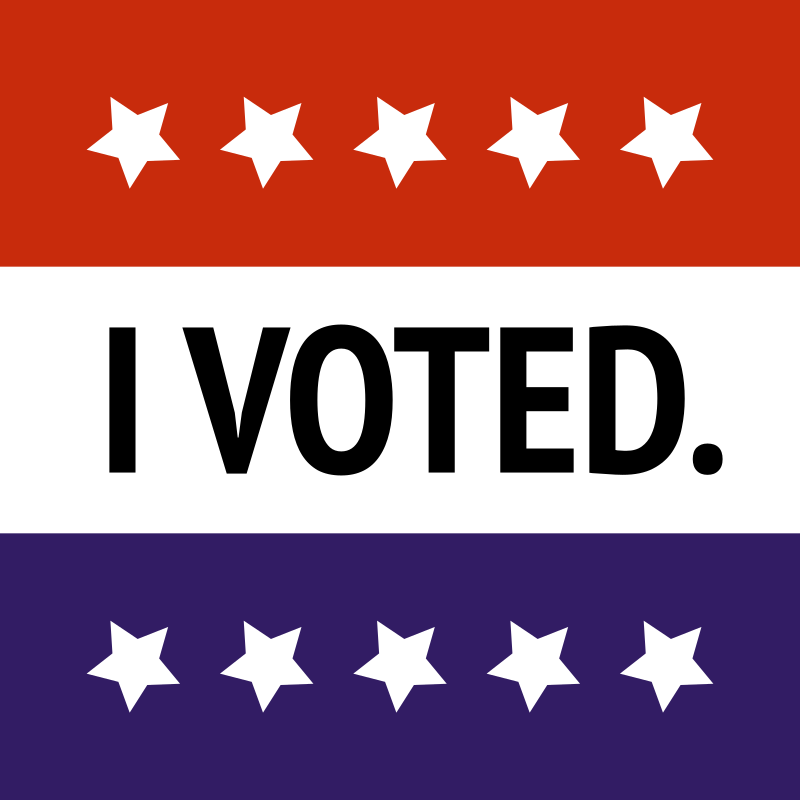 For the first ESL politics conversation exercise you need to read the following conversation and decide which of the options (A-D) in each question is the best to fill the gaps. Once you have finished you can use the get score button to see the correct answers.

Situation: Andrew and Bob go to vote together.


Choose the best option (A-D) in the following five questions to fill in the blanks in the politics conversation given above.

For the third ESL politics conversation activity you will need to have a conversation with a friend. There is a set of conversation topics in the is task that you should use. One person takes question set A and one person has question set B. Then you take it in turns to ask questions. When answering you should try to say as much as possible. If you can think of other questions to ask you can use them as well. If you have time you can swap question sets at the end and start again so you have a chance to ask and answer all of the questions.

If you liked these questions there are other ones in my 80 ESL Conversation Cards ebook that you can download. 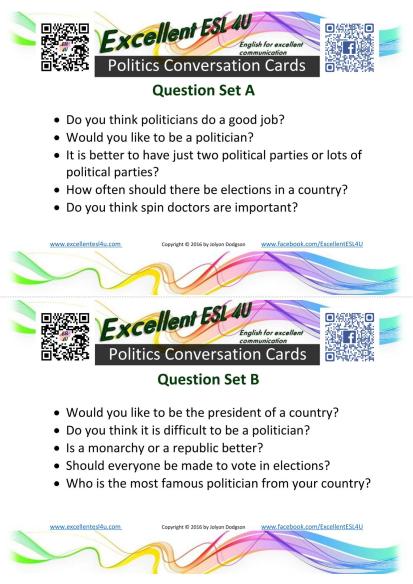