This ESL cities conversation page has example conversations and exercises for you to do in which you will practice speaking about cities and using vocabulary about living in a city. By doing the tasks on this page you will be able to prepare for having to talk about cities.

The first part of the page has two example ESL cities conversations in which cities vocabulary is used. You can read these to see how a natural conversation would happen. They have also been made into short cartoons that you can watch if you want to. If you do not understand any of the words that are used you can look at the ESL cities vocabulary page as this has definitions for lots of words about living in a city.

Situation: Jane and Bob talk about the high living cost in London.

Bob: Hi, Jane. You look upset. What’s wrong?
Jane: Well, I just had an argument with my landlord this morning.
Bob: About what? The rent?
Jane: Yes. He told me that the rent will increase by 10 percent.  I tried to haggle him down but failed.
Bob: You live in Hyde Park Corner, right? I read it’s the most expensive place to live in London because it’s close to Central London.
Jane: I know. I just didn’t expect the landlord to increase the rent that quick. I think I’ll move next year.
Bob: To where?
Jane: I don’t know. Some place near the tube station for sure. I hate traffic jams.
Bob: No one like them. But London is one big traffic jam, especially central London. I prefer riding my bicycle than taking a bus.
Jane: The tube is the best. Mind the pollution, Bob. Do your put on a mask when cycling?
Bob: Sometimes. I can’t afford the tube, to be honest.
Jane: I think you should manage your income more wisely. Like cutting expenses on luxuries such as dining out and take-away. You do that a lot.
Bob: You know I can’t cook. Do you know where I can find cheap meals?
Jane: Some food is occasionally offered at bargain prices, just find the best place.
Bob: Really? I don’t really like foreign food…. London is indeed expensive, especially for students like us, isn’t?
Jane: I can’t wait to graduate and get a high paying job.
Bob: Do you still want to live in London after you graduate?
Jane: I don’t really like living in a big city, but it’s easier to get a job in a big city like London.

Situation: Tui gets acquainted with Lucy at the university canteen and they talk about people’s opinions of London.

Tui: Excuse me. Is this seat taken?
Lucy: No, go ahead…. Are you an international student?
Tui: Yes, I am. I’m Tui from Thailand. Nice to meet you.
Lucy: I’m Lucy. Nice to meet you, too. Sorry, what’s your name again?
Tui: It’s Tui. T-U-I.
Lucy: OK, Tui. Are you new here?
Tui: Yes, I am. How do you know?
Lucy: Well, I can tell because I notice that you’re not familiar with your surroundings.
Tui: Where are you from, by the way?
Lucy: I was born and raised in London. I’m a Londoner.
Tui: Are you? You must know everything about London. I just got here two weeks ago. Is it true that London is an unfriendly city?
Lucy: Um, I think that’s the common trait of a big city. Big city life is fast-paced and everybody is busy with their own business.
Tui: I also heard that Londoners hate tourists.
Lucy: No! As a Londoner I have to say that we just don’t like rude and clueless tourists.
Tui: What do tourists do that annoys Londoners?
Lucy: Um, such as standing in the middle of the pavement looking at a map or traveling with luggage on the tube during rush hour.
Tui: Have you ever gotten angry with some tourists on the street or on the tube?
Lucy: Never. I just ignore them. 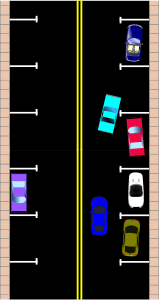 This page now has three ESL cities conversation exercises for you to do. You should try to do these as well as you can as it is important to practice speaking and having conversations as much as you can.

The first ESL cities conversation exercise is one where you need to fill in the blanks in the following conversation with the best option (A-D) in each question. You can use the get score button to see how well you did once you have answered each question.


Choose the best option (A-D) in the following five questions to fill in the blanks in the cities conversation given above.

I also have an ebook that you can download called 80 ESL Conversation Cards with 80 cards about several topics. 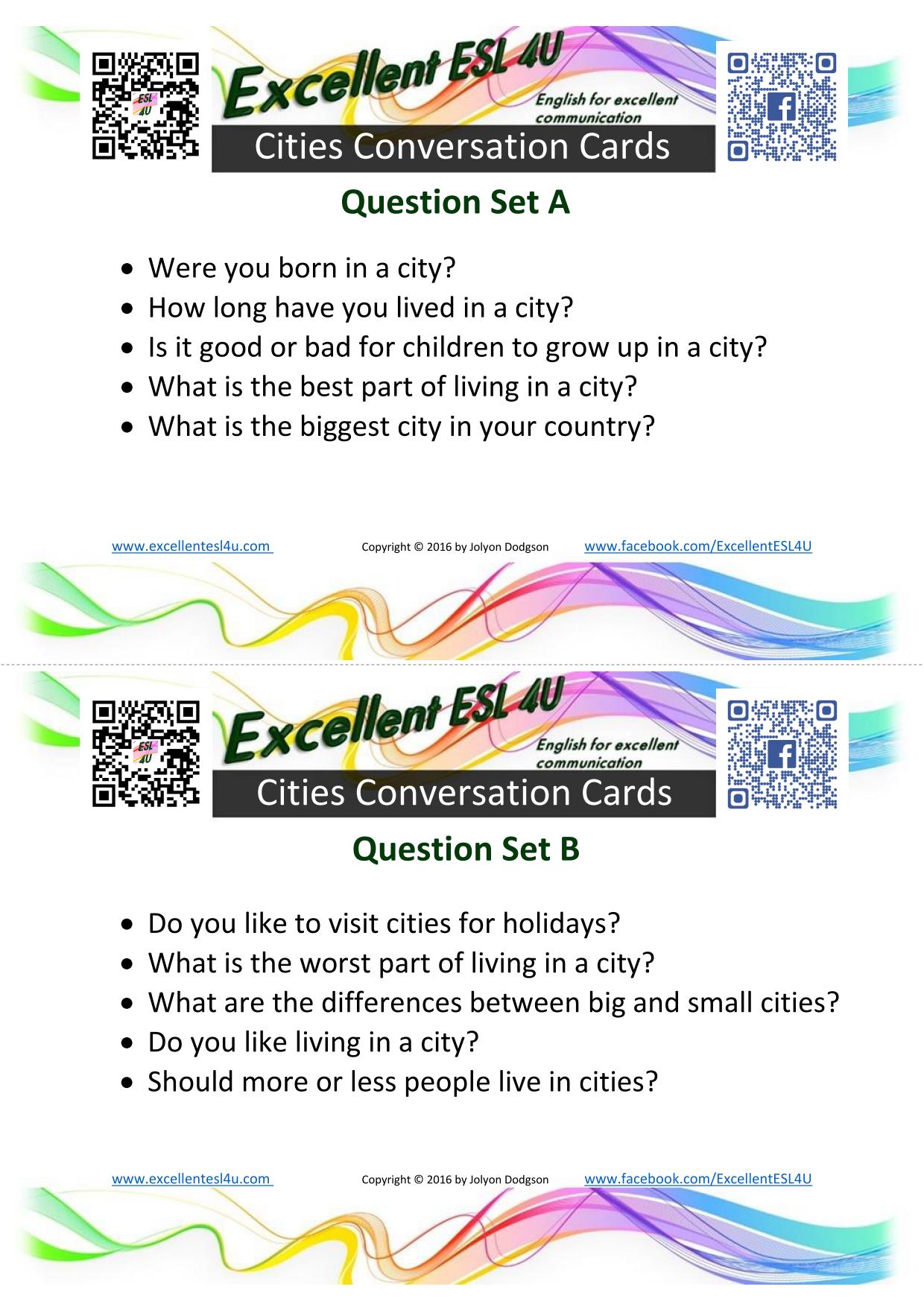