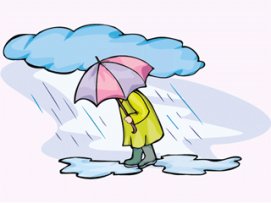 In many countries, such as the UK, being able to speak about the weather is very important. The people are interested in the weather: they will talk about what it is like, what it will be like and complain about what it has been.

This page has an ESL weather vocabulary list with definitions so you can learn all the words you will need. The vocabulary is also provided on flashcards for you to download and print. You can then use them to revise the vocabulary whenever you have time. There is also a recording of the vocabulary being spoken by a native speaker so you can listen to the correct pronunciation.

Then there are three exercises for you to try to see if you have learnt all the words. The exercises are:

Air pollution: Smoke and dust that make the air dangerous to breath. (noun)
Air pressure: The weight of the air pressing down. (noun)
Air: The gases that surround the Earth. (noun)
Autumn: The cool season where leaves start to fall from trees. (British English) (noun)
Blizzard: A very heavy snow storm. (noun)
Breeze: A gentle and slow movement of air. (noun)
Celsius: A new temperature measurement scale in which water freezes at 0 and boils at 100. (noun)
Changeable: When the type of weather is always different. (adjective)
Chilly: The temperature is quite cold.  (adjective)
Clear: When there are no clouds in the sky. (adjective)
Climate: The average weather over a long period of time. (noun)
Cloud: Water that is suspended high in the sky and can be seen. (noun)
Cold: A low temperature. (adjective)
Cool: A slightly cold temperature. (adjective)
Degrees: A scale used to measure temperature. (noun)
Dew: The water drops that collect on plants and surfaces early in the morning. (noun)
Downpour: A very heavy rain. (noun)
Drizzle: A slight and weak rain. (noun)
Drought: When there is no water or rain. (noun)
Dull: The opposite of sunny, the sun is hidden by clouds. (adjective)
Fahrenheit: An old scale used to measure temperature. (noun)
Fall: The cool season where leaves start to fall from trees. (American English) (noun)
Flood: When there is too much water so it covers the land. (noun)
Fog: Water vapor suspended in the air near the ground. (noun)
Forecast: To predict what the weather will be in the future. (verb)
Freezing: When the temperature is cold enough for water to become ice. (adjective
Frost: The ice crystals that form on plants and surfaces when it is cold. (noun)
Gale: Very big storm with strong wind. (noun)
Gusts: A short and sudden increase in wind speed. (noun)
Hail: Frozen balls of water that fall instead of rain. (noun)
Heat-wave: A period of time with very high temperatures. (noun)
Heavy rain: A lot of rain all at the same time.  (noun)
Hot: A high temperature. (adjective)
Humid: When there is a lot of water suspended in the air. (adjective)
Hurricane: A storm with very strong winds and heavy rain. (noun)
Ice: Frozen water. (noun)
Lightning: An electrical discharge from the clouds to the ground. (noun)
Melt: When ice, snow or hail turns to water. (verb)
Meteorologist: A person who studies the weather. (noun)
Mild: To be slightly hot when a cold temperature would be expected. (adjective)
Monsoon: The season with heavy rain most days, occurs in parts of Asia. (noun)
Overcast: When the sky is filled with clouds. (adjective)
Precipitation: When water falls from the sky as rain, snow or hail. (noun)
Puddle: A small patch of water on the ground after rain. (noun)
Rain: Water falling from the sky. (noun)
Rainbow: An arc of different colors in the sky when it is raining. (noun)
Season: The different parts of the year with different types of weather. (noun)
Shine: To give off a bright light. (verb)
Shower: Short and quick precipitation event. (noun)
Sky: What can be seen when looking up from the ground. (noun)
Sleet: Precipitation that is halfway between rain and snow. (noun)
Slush: Snow on the ground that is mixed with water, or turning into water. (noun)
Smog: Visible pollution from cars and vehicles in big cities. (noun)
Snow: Precipitation falling as ice crystals. (noun)
Snowstorm: Snow falling while a strong wind blows. (noun)
Soaked: To be very wet, to get very wet. (adjective)
Spring: The season where temperature is warm and plants start to grow. (noun)
Storm: When there are strong winds and heavy rain at the same time. (noun)
Summer: The hot season when not much rain falls. (noun)
Sun: The star that the Earth gets its light and heat from. (noun)
Sunlight: The light from the Sun that warms the Earth. (noun)
Temperature: The level of hotness or coldness experienced by something. (noun)
Thermometer: A device for measuring the temperature. (noun)
Thunder: The loud noise that occurs with lightning. (noun)
Thunderstorm: A storm with thunder and lightning at the same time. (noun)
Tornado: A very strong wind over land that forms a funnel. (noun)
Umbrella: A device for keeping rain off people. (noun)
Warm: A temperature that is slightly hot. (adjective)
Weather: The conditions within the air. (noun)
Weather forecast: A prediction about what the weather will be like in the future. (noun)
Wind: A movement of the air. (noun)
Winter: The cold season when it might snow and where many plants stop growing. (noun)

The following picture flashcards have all the items form the above list so you can download them and use them to learn the vocabulary whenever you have time. Click on the following link to download them. 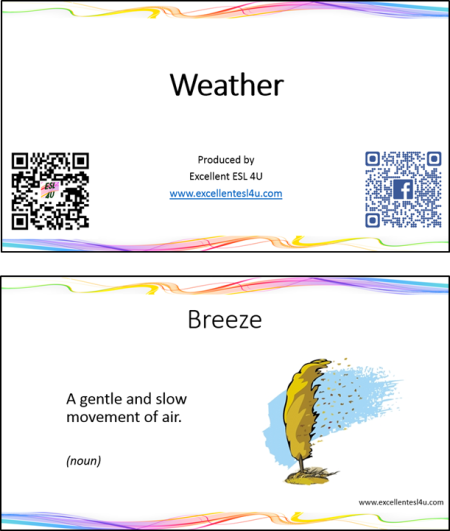 Click on the play button in the following audio player to listen to the weather vocabulary being spoken by a native English speaker so you can learn the correct pronunciation. The vocabulary items have also been included in the following video along with the flashcards.

The following three exercise will help you see if you have learnt the ESL weather vocabulary fully. Make sure you are confident that you know all the vocabulary words before trying the exercises.

There are five questions in this ESL weather vocabulary exercise, and in each one you need to choose the definition (A-D) that matches the given word.


Choose the correct definition for the weather vocabulary in this quiz.

Again there are five questions in this exercise and you need to choose the correct word (A-D) that matches the definition given in each of the questions.

In this ESL weather vocabulary exercise you need to choose the correct option (A-D) in each question that matches the pictures below.