The New Year is a fun time, and this ESL New Year vocabulary page will let you learn many of the words that you will need to be able to talk about the fun things you do. Your friends will often want to know what you plan to do, or what you did do, for the New Year holiday, so this page will help you learn what to say.

There are two main sections to this page. In the first section there is a vocabulary list with many words, and their definition, about the New Year. You can use the list to learn the words or as a reference that you come back to look at when you do not know the meaning of a specific word. Following the list there is a set of flashcards with pictures of many of the words that you can use to help you remember the meanings of the ESL New Year vocabulary. Then there are a couple or recordings of the vocabulary being spoken by a native English speaker so you can hear the correct pronunciation.

The second part of the page contains activities that you can do to test your knowledge of the ESL New Year Vocabulary. There are three tasks as follows:

1st January: The first day of the year when using the Gregorian calendar. (noun)
31st December: The last day of the year when using the Gregorian calendar. (noun)
Auld Lang Syne: A traditional Scottish folk song that is sung at midnight on the 31st of December. (noun)
Bagpipes: Traditional Scottish musical instrument that are played a new year celebrations. (noun)
Balloons: Small inflatable decorations for parties. (noun)
Banquet: A large formal meal that many people attend as a party. (noun)
Big Ben: A big clock in London that signals the start of the new year in the UK. (noun)
Buffet: A meal where people select their own food while standing up. (noun)
Calendar: A written record of the days and months in each year. (noun)
Celebration: A happy gathering of people to mark a special occasion. (noun)
Champagne: A white wine with bubbles in it that is drunk a celebrations. (noun)
Clock: A device that measure the passing of time. (noun)
Confetti: Small pieces of colored paper that are thrown in the air during certain celebrations. (noun)
Countdown: To count backwards (from a higher number to a lower one) to the start of a specific event. (verb)
Crowd: A large group of people. (noun)
Custom: A specific action that is always done in the same way and at the same time. (noun)
Dance: To move in time with music. (verb)
Decorations: The items used to make something more beatify or nice to look at. (noun)
Eve: The day before another day on which something happens. (noun)
Family: The group of people that you are related to. (noun)
Fancy dress: The clothes worn at a party were people dress-up as something different. (noun)
Fireworks: A small explosive that produces bright colors that people use a celebrations. (noun)
Gathering: A group of people that come together for the same occasion. (noun)
Gregorian calendar: The most widely used dating system that started in Europe. (noun)
Hangover: The after effects of drinking too much alcohol. (noun)
Hogmanay: The traditional Scottish name for New Year. (noun)
Holiday: A time when you do not need to work. (noun)
Host/hostess: The person who gives and organizes a party. (noun)
Invitation: A request for someone to attend an event or party. (noun)
Invite: To ask someone to attended an event or party. (verb)
Kilt: The traditional Scottish clothing that a piper would wear when playing the bagpipes. (noun)
Lunar New Year: The new year under the Chinese calendar. (noun)
Midnight: The time in the middle of the night when one day ends and another day starts. (noun)
Music: The pleasant sound that people listen to for enjoyment. (noun)
New Year: The time when the last year ends and the next one starts. The 1st of January in the Gregorian calendar. (noun)
New Year’s Day: The first day of the year. The 1st of January in the Gregorian calendar. (noun)
New Year’s Eve: The last day of the year. The 31st of December in the Gregorian calendar. (noun)
Nightclub: A building where people go to dance and drink until very late at night. (noun)
Noisemakers: An item that is used at a celebration to make happy noise. (noun)
Party: A group of people who are celebrating something. (noun)
Piper: A person who plays the bagpipes. (noun)
Public holiday: A day when the whole country does not need to work. (noun)
Resolution: A promise to do something or to change something during the following year. (noun)
Reveler: A person who is attending a party. (noun)
Sale: The act of selling items for a reduced price. (noun)
Songkran: The traditional Thai new year that is celebrated in April. (noun)
Stroke of midnight: The precise moment when a clock goes from 11.59pm to 12.00am. (noun)
Toast: To celebrate an occasion or person by drinking something. (verb)
Tradition: The actions and situations that are always done the same way each year. (noun)
Vow: To promise to do something. (verb)

Here there is a set of flashcards with the ESL New Year vocabulary. Many of the cards also have a picture to show what the word means. You can either click on the following picture or link to download the flashcards to your own computer. 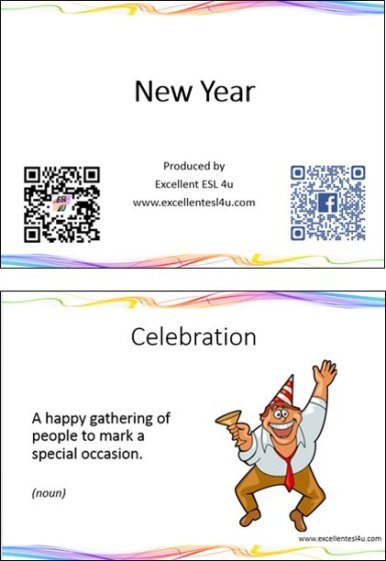 Now there are two recordings of the ESL New Year vocabulary being spoken by a native English speaker. In the first recording you can just listen to the correct pronunciation of the words, while in the second recording you can watch a video of the flashcards being shown at the same time as hearing the correct way to say the words.

For the first ESL New Year vocabulary exercise you need to chose the best option (A-D) in each question that has the correct definition of the word given. When you have finished you can use the get score button to show the correct answers.


Choose the correct definition for the New Year vocabulary in this quiz. 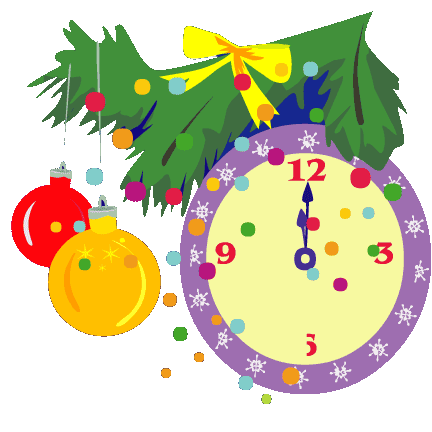 For the second ESL New Year vocabulary exercise you should again chose the best option (A-D) that has the word to match the definition given in the question. Then there is the get score button again for you to use to see the answers.

For the third ESL New Year vocabulary exercise you need to identify the best option (A-D) in each question that has the word that matches the indicated picture. You can again see the correct answers by using the get score button. 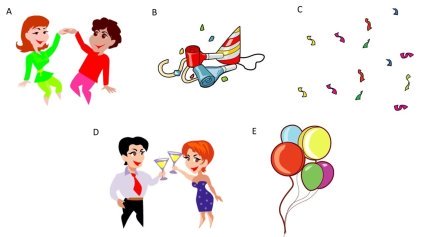