Being able to talking about where you live is very useful, and this page of ESL houses vocabulary will give you many words to help you do that. If you learn all the words included in the vocabulary list on this page you will know a lot about houses and what to call all the different parts.

The first thing on this page is the list of vocabulary. Each item in the list has a simple definition so you can learn what all the words mean. After that there are some flashcards of the list for you to download and use to learn the vocabulary whenever you have time. After that there is a couple of ways for you to listen to a recording of the ESL houses vocabulary being spoken by a native English speaker. In the first you can list listen to the pronunciation and in the second you can watch a video of the flashcards at the same time as each word is being spoken.

Then at the end there are the three following exercises for you to do so you can see if you really have learnt the ESL houses vocabulary:

You can download the ESL houses vocabulary flashcards by either clicking on the following picture or the link after it. You can then use them whenever you have some free time. 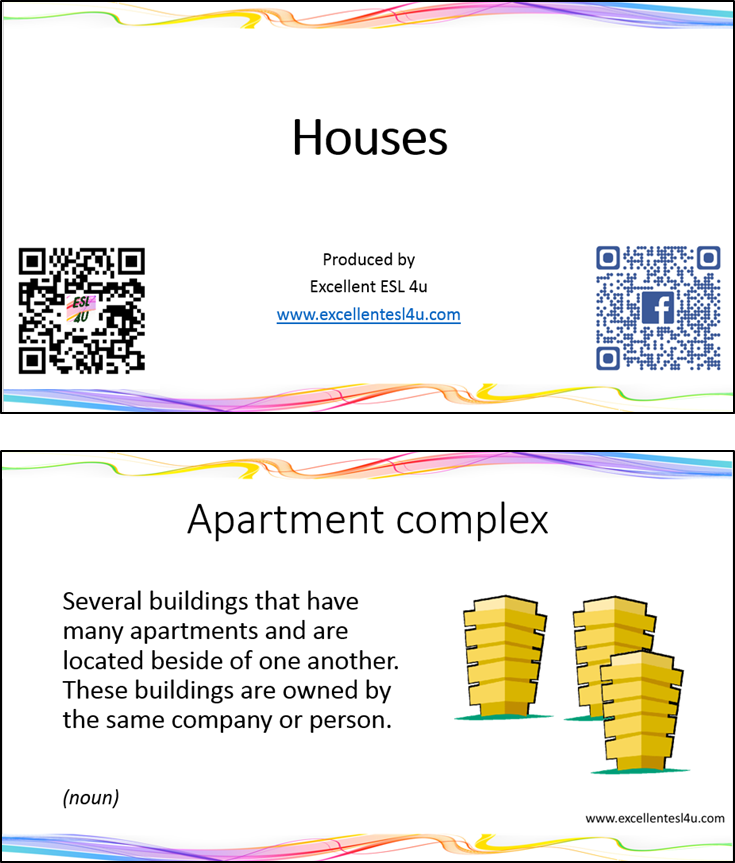 In this ESL houses vocabulary exercise you need to decide which of the definitions (A-D) matches the word given in each of the questions. When you have finished you can use the get score button to show the correct answers.


Choose the correct definition for the houses vocabulary in this quiz.

In the next ESL houses vocabulary task you need to decide which word (A-D) goes with the definition given in each question. Again you can click the get score button to see how you did.

The last ESL houses vocabulary activity has five pictures and you need to decide which word (A-D) matches each picture for each question. Then you can again click on the get score button to see how many you got correct.