This page contains various resources about ESL banking vocabulary. They are:

Just scroll down to find the section you want. 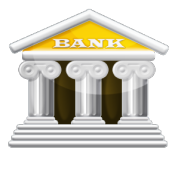 To help you learn the ESL banking vocabulary above, Excellent ESL 4U has produced some flashcards that you can download and print out. Just click on the image or link below to download the flashcards. 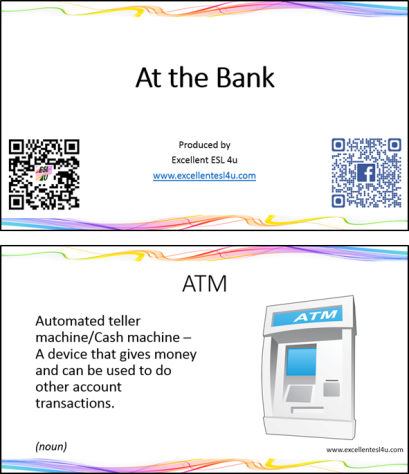 The vocabulary presented above with definitions or on the flashcards has been spoken and recorded so that you can hear the correct pronunciation. Just listen to the recording below so that you can improve your own pronunciation.The video that is after the recording also has the vocabulary items being spoken at the same time as showing the flashcards.

When you know and understand all the vocabulary presented on this page you can try the following exercises all about the ESL banking vocabulary you have just learnt.

In the following 5 questions you will be given a word from the vocabulary list above and 4 possible definitions. Chose the correct option from the list of definitions. When finished do not forget to post your score to Facebook to show all your friends how good your English is!


Choose the correct definition for the banking vocabulary in this quiz.

In this exercise each question has a definition of a word from the ESL banking vocabulary list and you need to chose the word with the same meaning. There are 5 questions with 4 options to chose from in each.

Identify what is shown in each of the 5 pictures (A-E), below, by answering the following questions. 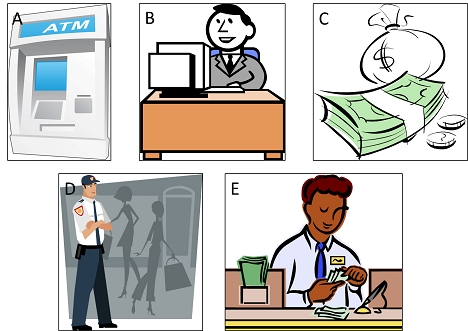